Aims of the Clean Air Group

Hotwells and Cliftonwood Clean Air Group (HCCAG) was set up with HCCA support after a public meeting on 15th November 2018. Its aim is to give a voice to residents about how to tackle air pollution in the city, and in particular, in Hotwells and Cliftonwood. Merchant's Road and Jacob’s Wells Road regularly exceed legal limits for pollution as a results of traffic. Significant local air pollution is also produced as a result of the popularity of open fire and stove burning. You will find more details in our Mission Statement.

We are launching a leaflet campaign to inform people about the bad effects of smoke produced by burning wood on health. Children and adults with asthma and the respiratory problems are badly affected. 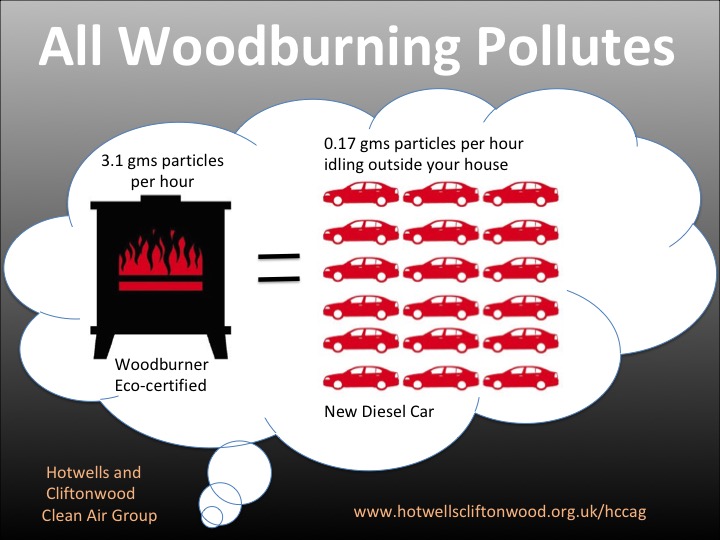 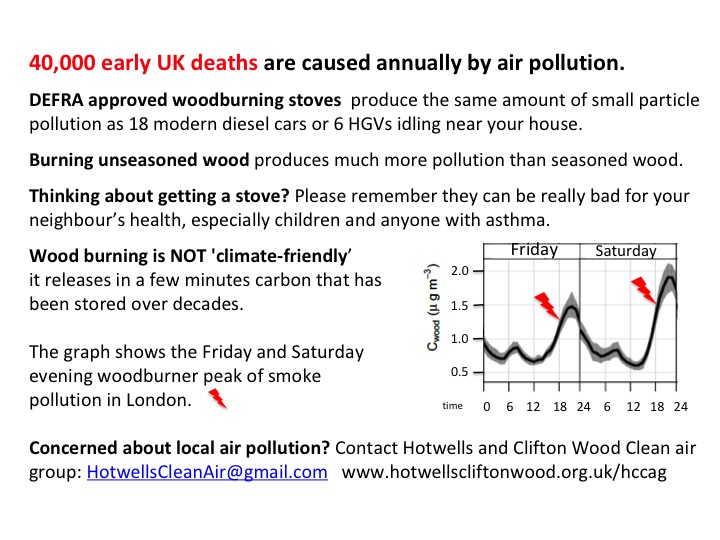 We are currently trying to raise awareness of the surprisingly negative effects of woodburning stoves in cities.  Although they are often portrayed as environmentally friendly, stoves release in minutes carbon that trees have locked away for decades.  They also contribute air pollution that is far more dangerous to health than cars and lorries do. We have designed a leaflet for local distribution

- Can we persuade the Mayor to reveal his analysis of air pollution for a possible Clean air zone?

- Campaign to inform residents about the bad health effects of smoke from wood burning.

Air pollution affects us all, particularly the young: babies breathe in three times the amount of air per kilo of body weight than adults do. It has been linked to inhibited lung development and life-long conditions including asthma, as well as infertility, birth abnormalities, premature births, pneumonia in the very young, cardiovascular disease (blood clots, heart attacks and strokes), neurological conditions  (lower cognitive development, depression, Parkinson's disease, and dementia), intestinal disease, cancers, and type 2 diabetes [1].

Today's city air can contain more air-polluting particles than it did during the great "pea-souper" smogs of 1950's London [1]. The difference is that today's main pollutants are invisible nitrogen dioxide gas (NO2) and tiny particulate matter (PM). In cities these come from diesel engines, and burning coal and wood in domestic fires and stoves. Both diesel fuel and wood burning have been promoted as "environmentally friendly" options. Neither is true. In Bristol, levels of NO2pollution are illegal in many areas. PM is not monitored widely, but Bristol City Council acknowledges that health-based limits may be exceeded in the city centre and on major roads [2].

We have reached the limits of what can be achieved by improvements in engine technology, and there is wide recognition that the age of petrol and diesel fuels must come to an end. The UK government plans to ban the sale of new petrol and diesel cars by 2040. Cities all over the world are committing to zero emission zones and transport systems powered entirely by renewable energy. In late 2018, Bristol City Council adopted a resolution declaring a "climate emergency" and pledged to become carbon neutral by 2030. This undercuts the ambition of the Bristol One City Plan[3]- actually released later, in January 2019 - which was to achieve carbon neutrality by 2050. This plan aims at a city that is fair, healthy and sustainable for all by 2050.

Though the drive to achieve carbon neutrality is a response to climate change, it will also result in huge improvements in air quality. The One City Plan sets out what is necessary: electrification of the transport network; improvements in walking and cycling infrastructure; and sourcing renewable energy for homes and other buildings. The Plan includes targets for air pollution, including achieving World Health Organisation limits by 2031, and significantly undercutting these by 2050. The Plan also implies - but does not specifically state - that a reduction in the number of vehicles on the city's roads is needed, in order that other objectives - such as reduced congestion, improved transport journey reliability, and improved public spaces - can be achieved.

We support the One City Plan. However, Bristol's air quality is illegal in places so we believe that action must be taken urgently to accelerate the programme as set out for improvements in air quality. Our aim is to promote actions that will improve quality of life for everyone in Bristol: