The residents of Avon Crescent, Ashton Avenue and Nova Scotia Place have been meeting since 2013 to try and develop a solution to the dangerous way many vehicles use our roads.

The residents' group, Harbourheads, have developed a safe re-routing scheme that will work with the new Metrobus road layout and conforms to HCCA Community Traffic Strategy

Bristol City Council have launched a Public Consultation – closing on September 30th – based on the Harbourheads scheme to reroute traffic at the west end of Spike Island. A leaflet about this scheme was delivered to households in this area by post on 7th/8th September.

We urge you to support this scheme which will improve safety to all at this busy west end of the harbour. Rerouting proposals will help to reduce the negative impact of Metrobus, and minimise delays to everyone needing vehicular access on and off Spike Island.

Please email [email protected] with your points in its favour. 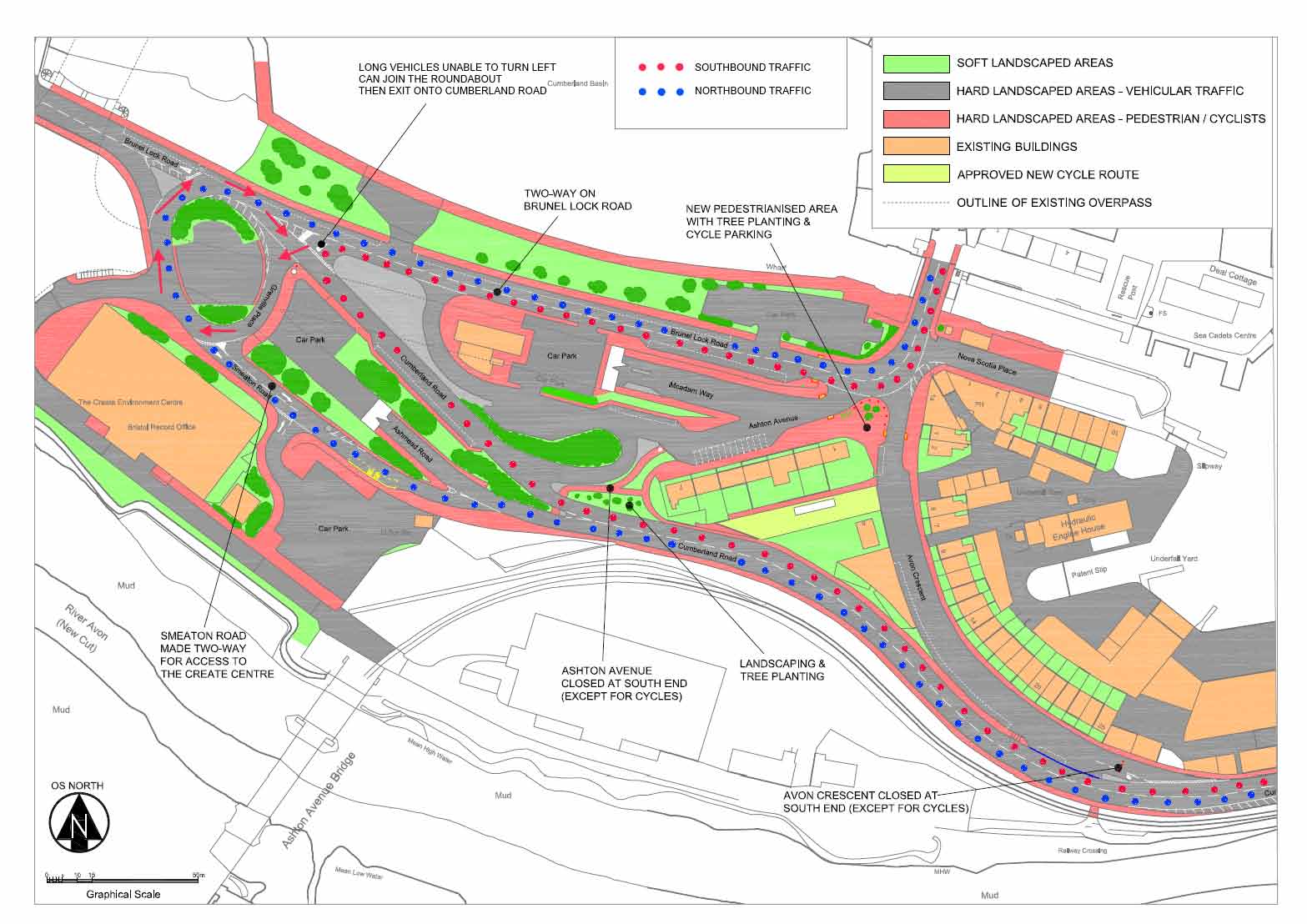 For more detail on the scheme and how to respond read on...

If this scheme is implemented traffic will not be permitted to use Avon Crescent or Ashton Avenue as through routes between Cumberland Road and Junction Lock Bridge.

This is because, when they finish building Metrobus, Avon Crescent will be made one-way eastbound and all the westbound traffic on Cumberland Rd will go across Smeaton Bridge.

This and new Metrobus traffic lights would delay the free-flow of vehicles needing to get on/off Spike Island.

A big advantage of rerouting all the through traffic over Smeaton Bridge (except access, exceptional & emergency vehicles) is that it will allow the traffic to flow much more freely by separating traffic from the walk and cycle routes and access to Metrobus stops. It removes the need for crossings and so many traffic lights.

Rerouting will provide all Spike Island east and westbound vehicles access via a free-flowing two-way main road with less delays.

This is in addition to all the environmental and safety benefits (listed below) that come from being able to fit all the walk and cycle routes under Smeaton Bridge and enabling them to connect safely in a traffic-free Avon Crescent.

A way to compare the effect on vehicle access is to consider the number of ‘red light’ delays to drivers.

Rerouting all the through traffic would also be considerably cheaper.

Please email [email protected] with your points in its favour.

"Many residents in H&H ward will soon receive consultation forms on the proposed Avon Crescent traffic re-routing scheme. As part of the Metrobus changes, Avon Crescent is already scheduled to become one-way, southbound, with northbound traffic re-routed about 200m further around under the Cumberland Basin slip-road. There is no option about this happening - it was signed off 3 years ago by the previous Mayor and works are already under way.

However, an additional option has been proposed, which would see the southbound traffic also re-routed along the same path as the northbound traffic. This would lead to Avon Crescent itself becoming a no-through-road, which would be beneficial because the Metrobus changes will see a cycling route and Metrobus passengers all crossing Avon Crescent on a busy curve. The future Maritime Centre being developed at the Underfall yard will also add more pedestrians into the area.

I have always supported this scheme, because half the traffic (northbound) will already be forced to take this new route, so making the southbound traffic take a 200m longer route is a small price to pay for a much safer crossing for walkers, Metrobus passengers, and cyclists. The consultation period will run from 9th to 30th September 2016. From the 9th you can respond here:http://tinyurl.com/hw6zx2w

You may find road-map on the Council's delivered leaflet slightly tricky to work out exactly where traffic routes are. If so, try this improvised map which has extra dots on for guidance:http://bit.ly/2ctHLii"